“Why are you measuring that?”

What is blond, amber or brown and needed by LakePulse field teams? The correct answer is “Canadian lake water”: our crews diligently collect hundreds of water samples as part of our national assessment of lakes. Although, you’re right if you answered “tea”. Some field teams brew a lot of tea, and even keep up their yoga practice… everywhere!

Wine has sommeliers, beer has cicerones and LakePulse has an “optics and remote sensing group” (or “colour geeks”) specially trained to inspect the clarity and colour of lakes across Canada. We’d venture that you’ve never really thought about the colour of lake water, what causes it and how it can be used to monitor Canadian lakes. Never fear, our “colour geeks” fulfill this role, which entails a deep knowledge of how sunlight, water and the myriad substances in lake water interact. Watch the video below!

If you were a black fly or mosquito buzzing around a LakePulse boat (we don’t really need you there, we have plenty already!), your many eyes would see a field team pointing gun-like instruments at the sky and water, and then dropping funny-looking contraptions into the lake. These instruments are all, in different ways, measuring the colour of water and the physical properties driving it.

Gazing into a tea cup, have you ever wondered what causes the colour of tea? A plain-spoken description, perhaps one that only a scientist (or a kid) would use, would be “dead plant stuff”. Plants – like all living things – are mostly made up of water and organic molecules (organic just means it came from living things).

Organic molecules can be pigments, which give colour to leaves, fruits and flowers. For example, more of the pigment “chlorophyll-a” causes the grass to be greener on the other side of the fence. In a spectacular fashion, chlorophyll degrades in autumn leaves, and then carotenoid and anthocyanin pigments turn trees an array of colours (yellow, orange and red). The natural world explodes with colours, kinda like 70s décor…

Different tea colours (yellow, green, red, brown) come from a single plant species – Camellia sinensis – because the leaves are subject to different transformation processes (steaming, drying, oxidation, heating) that alter the pigment content. When tea leaves are steeped in water, the pigments are revealed as they dissolve in the tea water.

In the case of brownish lake water, the watershed acts like a tea bag as water flows through it carrying out the colour from decaying vegetation. Lakes are the tea cups that collect this coloured water, which varies in colour from yellow, brown to burgundy. If there is a lot of old plant material that is highly oxidized, the lake is very dark. But, if there is very little decayed plant material, the lake water will be clear and look blue from above. So, the colour of lakes is generally caused by changes in the amount (and to a lesser extent type) of “dead plant stuff”, which scientists call “coloured dissolved organic matter” (CDOM) or tannins.

If you’re a tea connoisseur, you probably drink your tea in a white porcelain cup and carefully time the removal of the dead plant stuff (tea bag), thus obtaining the perfect colour and taste. The CDOM in your tea, has the property of “absorbing” the purple and blue colours in light passing through your tea. This means the blue and purple photons have been removed, and only photons of other colours (yellows, greens and reds – depending on the tea leaves) can zip through your tea water, reflect off the white cup and bounce toward your eye.

Exactly the same thing happens in lake water. However, instead of light hitting the bottom of the lake (unless it is very clear or shallow), it bounces off lots of little floating particles, and some photons bounce right into your eye – voila, lake colour! Your eye receives a cocktail of photons of different colours (those that were not absorbed), but you perceive one colour – usually yellowish, greenish or brownish lake water.

So, floating particles within lake water are extremely important to “colour geeks” in LakePulse because they “scatter” light. To explain this, let’s now say that you sealed very tightly, by mistake (apparently a mistake that has been repeated over many thousands of years), some “barley tea” (with the barley) in a bottle, and you left it there for a while. You would find that a lot of froth would be created when you opened up your bottle due to the accumulation of CO2 released by yeast during fermentation. Your nice barley tea has been ruined because a neurotoxic substance, ethanol, has accumulated in the tea, and you will have to take precautions when you consume it. Before you do, you would likely wonder, “my ruined barley tea is brown, but why is the head white?”. (Why you would call the froth a “head” befuddles us.) If you asked some “colour geeks”, they would likely tell you something along the lines of:

“The interaction of photons with successive layers of air, water and air that have different refractive indexes leads to a high scattering cross-section for individual bubbles. The fraction backscattered to your eye is therefore going through a very optically-thin layer and not influenced by the imaginary part of the refractive index of the bubble skin. Since the bubbles are large, the backscattering is spectrally flat. This can be modeled easily by a coated-sphere model and radiative transfer simulations.”

As our readers know, we don’t go for science mumbo jumbo here! Instead, we like to say that when light of any colour hits froth, it very efficiently bounces off the bubbles (like little mirrors). So, light cannot enter the foamy portion of ruined barley tea and is not absorbed; the light bouncing to your eyes is the same colour as when it hits froth (if you want blue froth, look at it under blue light). Sunlight is white because it is essentially all colors mixed together. All light that is “reflected” off bubbles or particles is called scattering. Scattering by microscopic particles in water is very important when we observe lake colour as it is the reason why we see light coming out of lakes!

Besides CDOM, another key component that changes the colour of water is phytoplankton, which are tiny algae and photosynthetic bacteria that float in lakes. These tiny algae are generally greenish or brownish. In exactly the same way that your kale smoothie is green, lakes with lots of algae turn green. This is because algae and water absorb blue and red light, and only green light leaves the water and reaches your eye. In some lakes, an increase in phosphorus (one of the key chemicals found in “plant food” and which often ends up in lakes from agricultural run-off) can trigger an algal bloom that results in a green soupy mess – containing lots of chlorophyll-a pigment. Cyanobacteria is a type of phytoplankton that is often more abundant in degraded lakes. They can form a large fraction of the green soupy mess, and can make the water toxic for consumption.

From lakes to space…

For “colour geeks”, studying the optical characteristics of lakes is interesting in itself. By looking at the colour (actually the whole spectrum of light coming out of lakes), they can tell what is in the water. But, you ask, what can you do that is USEFUL? Well, where it gets really interesting is when you consider that lake colour can be observed from space by satellites. With recent technological advances, we can look at much smaller lakes than just a few years ago. This means we can observe and say something about many of the hundreds of thousands of lakes in Canada from satellite images.

In a few years, LakePulse scientists will provide estimates of the CDOM and phytoplankton in most lakes in Canada using satellite remote sensing. CDOM is important not only because it changes the colour of lakes but also, in sufficiently high amounts, it reduces the light available for algae and plants. Of course, cyanobacteria and other phytoplankton are undesirable in large amounts and occur in lakes whose natural conditions have been altered. Lake colour will therefore provide us with a valuable tool to observe and monitor lake health across Canada from satellite images. 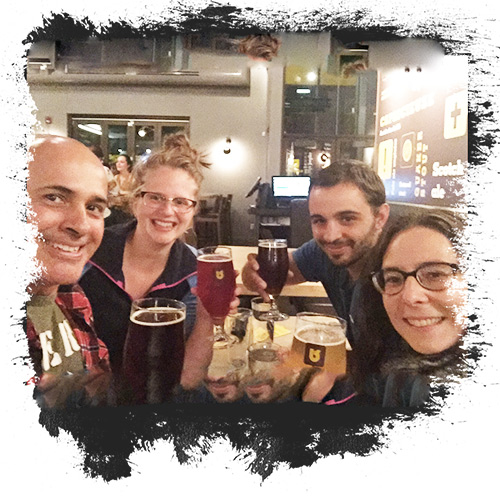 Lastly, we were surprised by the number of survival tips offered by our field teams. Apparently, if you are really stuck and have nothing left to drink, instead of risking dehydration the Yellow team reports that you can drink ruined barley tea in small amounts. The Green team says it’s better cold and to use a Van Dorn bottle to collect hypolimnion water (lake bottom water) to chill it.

In LakePulse, our elite Blue team is deployed for the difficult sampling of northern lakes. They do not understand why others teams have trouble brewing tea. The Blue team recommends their tea protocol: make fresh tea at the crack of dawn; use water at 80˚C; do not store it in airtight containers; do not chill.

The Blue team has never seen a “head” on their tea. They have, however, detected an optical effect from adding milk, which whitens tea. Our Director spent a couple of grueling weeks with the Blue team, and he contributed sparkling conversation such as this:

“Milk that has been homogenized contains lots of microscopic lipid particles in suspension. The large size of the particles together with the low imaginary and real refractive index of the lipids leads to a short path-length of the backscattered photons in the water, and thereby these photons have the same spectral signature as the impinging light. It can be easily modeled by a simple application of Mie theory and radiative transfer simulations.”

Now, we suggest you enjoy your favourite drink and ponder the wonders of the science of light!